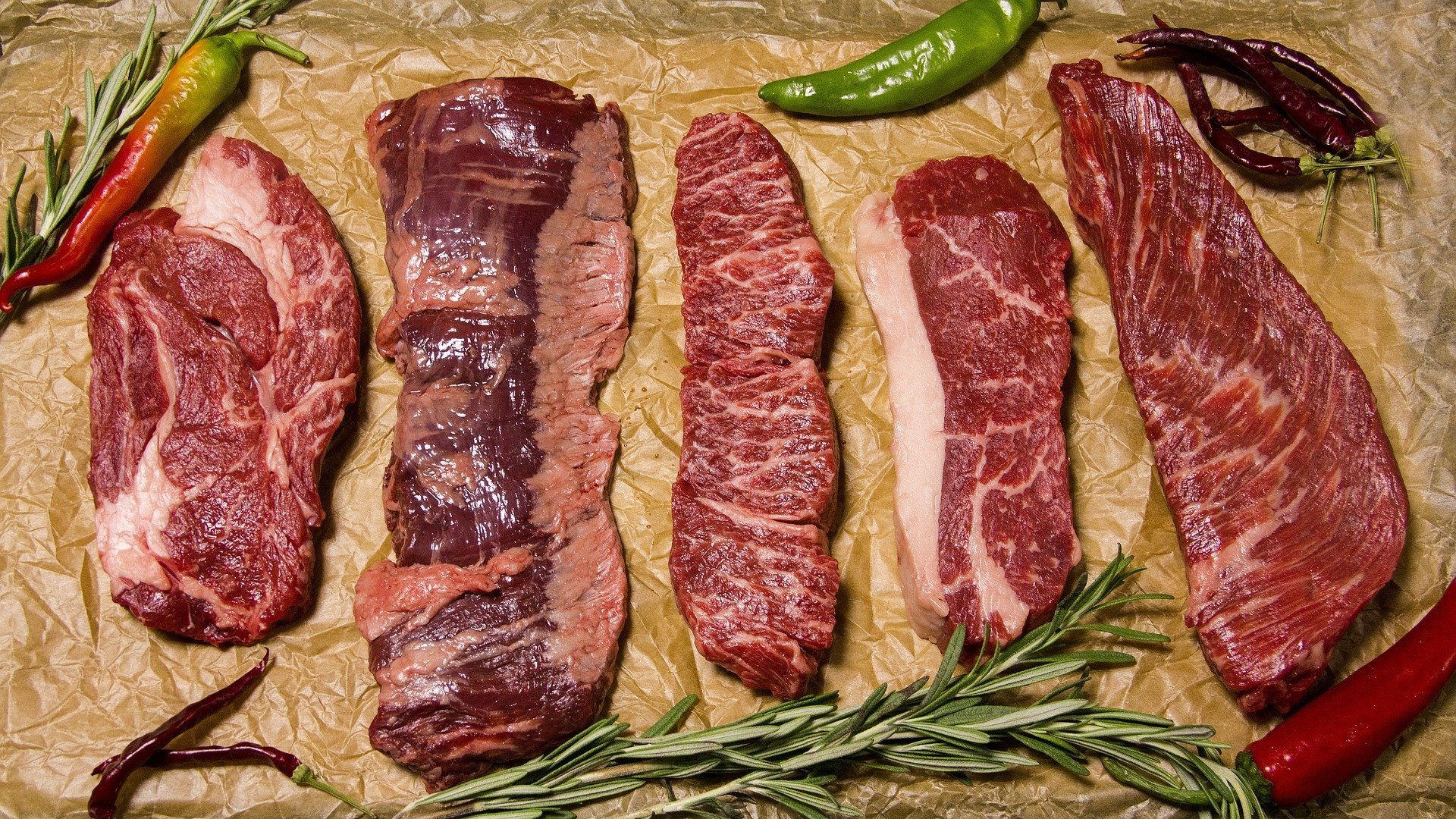 Many people wonder what experts consider to be the best cut of steak. Unfortunately, there is no such thing as the “best cut of steak” – it all comes down to personal preference. While there are cuts that many regard to be the “king” or “queen” of all steaks, you won’t really know until you try it out for yourself. Even then, there’s the issue of overcooking your steak or choosing improper seasoning.

In this article, I will go over 5 of my favorite cuts of steak, what I like/dislike about them, and how I think you should cook them. Truth be told, there exists a steak that far surpasses the boring tenderloin. If you’re still new to steaks, I suggest reading this blog post to answer any potential questions that you may have.

I (and many others) believe that the ribeye is the best cut of steak that a cow offers. The ribeye comes from the rib section from the cow (hence its name). It consists of two different muscles – the longissimus dorsi (center eye) and the spinalis dorsi (cap). The ribeye offers two different textures and two different tastes, but I would go so far as to claim that the spinalis cap is the most prized cut of steak. As such, you want to ask your butcher for a front-end ribeye (less center eye, more cap). These steaks are tender, flavorful, and very juicy.

The center of the ribeye has a fine muscular grain (meaning the muscle fibers are short so it offers a soft tenderness). The ribeye center is from the came cut of steak as the New York Strip steak, but from a different section of the cow. The center eye offers a buttery and moderately beefy flavor profile. Unfortunately, I find it slightly boring when compared to the cap (though the center eye still a fantastic steak).

On the other hand, the spinalis cap is the most decadent treat that the cow has to offer. Its fine grain is similar to that of the ribeye center, but it possesses significantly more marbling. This gives the spinalis cap a melt-in-your-mouth tenderness with a very minimal chew. The spinalis muscle packs a strong buttery and beefy flavor profile that I consider to be the best on the cow.

A steak of this magnitude and esteem deserves respect. Purchase a thick cut (no less than 1 inch, 1.5+ inches preferred) with generous marbling. Pan-fry or grill it using the traditional method of cooking steaks. Season simply with salt, pepper, garlic, and herbs. I prefer to cook the ribeye sous-vide or reverse sear and finish it on a charcoal grill.

The picanha steak is popular in Brazil, and it is the second best cut of steak. In the United States, it is often sold as a Top Sirloin Cap (or Rump Cap for those in the U.K.), or as a culotte steak (fat cap trimmed off). As this is a sirloin cut, you can expect the same flavor and texture out of picanha as you would from a New York Strip steak. However, the deciding factor in picanha’s ranking is its generous fat cap. This fat cap helps picanha rank near the top of the leaderboard for the best cuts of steak.

Picanha has a moderate grain but still offers a tender bite with a slight chew. The sirloin muscle is characterized by a strong, juicy, and beefy flavor profile. While it lacks intramuscular marbling, the generous fat cap provides picanha with a partially buttery texture, mouthfeel, and taste. I personally believe that this steak is better than the ribeye center, but falls just short of the ribeye cap.

Again, a steak of this magnitude and esteem deserves respect. As picanha generally comes as an entire cap, you want to cut individual steaks WITH the grain first (in the direction of the muscle fibers). This results in the final cut being against the grain. Be sure to cut thick steaks (about 1.5 inches thick) and DO NOT discard the fat cap. Brazilians generally cook this steak whole on a skewer (roasted over an open flame), but it is fine to pan-fry. Cook these steaks over charcoal (or at least an open flame). Season picanha with only salt, but you may baste it with garlic-herb butter.

The New York Strip places third in my ranking for the best cut of steak. It comes from the sirloin section of the cow (similar to picanha), but more specifically the top sirloin (top rump). The Strip Steak is one of the most popular cuts of steak in the United States. As it comes from the sirloin, you can expect a strong, juicy, beefy flavor profile and a moderate grain (tender, but slightly chewy). This cut of steak has a thin fat cap but makes up for it with a moderate amount of intramuscular marbling. As a result, provides a buttery texture and taste ONLY IF you purchase one with a high marble score/grade.

The New York Strip is a very versatile steak (similar to the ribeye). Whether you cook it pan-fried, grilled, sous-vide, or reverse seared, this cut will turn out good. Purchase a strip steak that is at least 1 inch thick seasoned with salt, pepper, garlic, and herbs. Strip steaks are also excellent when served with a traditional bordelaise, bearnaise, or peppercorn-cream sauce.

The flat iron cut has gained a lot of traction in the steak world as of recently. When prepared improperly, the connective membrane can result in a gristly, tough steak. However, proper treatment of the flat iron can result in a cut of steak that is reminiscent of a strip steak. The flat iron steak offers a bold, beefy flavor and a soft, slightly chewy texture. This steak falls just short of the New York Strip but is often sold for significantly less.

The flat iron steak is generally around 1 inch thick (it’s just the way the muscle is). It is best grilled over charcoal or an open fire (but it can be also pan-fried). These steaks are generally well-marbled but can really benefit from some trimming to remove the fibrous membrane. Season this cut of steak generously with salt, pepper, and herbs and baste both sides with plenty of butter.

The hanger steak is a butcher’s cut (meaning it’s thin and beefy), similar to the skirt steak and the flank steak. This cut of steak packs a robust, beefy, and slightly metallic/minerally flavor profile. When cooked properly, the hanger steak is fleshy, tender (but firm), and juicy. They’re best marinated to tenderize the steak and offset some of the mineral beefiness that people aren’t generally accustomed to. I prefer this steak over the skirt and flank steaks because of its taste (which can make up for its somewhat chewy texture). However, many people tend not to like this steak.

Many butchers believe that the hanger is the best cut of steak. This cut is known as a “butcher’s secret” because butchers would rather take this cut home and eat it themselves than sell it. They’re that good.

These steaks are best marinated and cooked over a grill. Because they’re so thin, you want to make sure that they’re cooked over a hot source of heat for a short period of time. Cook hanger steaks to no more than medium. After marinating them, they won’t need any extra seasoning other than some finishing salt and freshly cracked pepper (or a marinade baste/glaze).

The tenderloin (filet mignon) possesses near-unparalleled tenderless with its buttery mouthfeel. However, it suffers from a boring (mild) flavor profile, poor marbling, and a lack of juiciness. The filet mignon does not deserve to be the best cut of steak. It’s overrated and boring.

I’ve mentioned it once and I’ll mention it again; the ribeye cap (spinalis) is the best cut of steak that the cow has to offer. It has a fine grain with generous marbling, which gives it a melt-in-your-mouth tenderness, a juicy bite, and a buttery, beefy flavor profile. However, the ribeye cap is a relatively flat muscle (much like butcher cuts).

Most people don’t know that you can actually buy the ribeye cap alone because they’re so prized and difficult to find. To make a ribeye cap steak, all butchers have to do is take a flat of the ribeye cap, roll it up, and tie it with butcher’s twine. The ribeye cap steak is just slightly less tender than a filet mignon, but it offers significantly more flavor and juiciness.

Respect the ribeye cap. Pan-fry, grill, sous-vide, or reverse-sear it to no more than medium-rare. Keep the butcher’s twine on for the entire cooking process, and only take it off before you’re about to eat it. Season it with salt, pepper, garlic, and herbs. Finish it with a compound butter, and let it rest.

While many people have personal preferences, I (and many others) sincerely believe that the ribeye, picanha, New York Strip, Flat Iron, and Hanger steak are the 5 best cuts of steak that the world has to offer. That’s not to say that every other steak is bad – these are just my top 5. Try them all and let me know what you think. If you’re still new to steaks, please consider reading this guide/article that I wrote.

Please let me know what you think the best cut of steak is! If you enjoyed reading about my favorite cuts of steak, please consider leaving a comment or question below!

How to Season a Steak

The 5 Best Ways to Cook a Steak